Five international tax enforcement heads, including from the Internal Revenue Service’s Criminal Investigation unit, have been meeting this week to discuss their joint initiatives for combating tax evasion.

The group of five leaders, known as the Joint Chiefs of Global Tax Enforcement, or J5 for short, represent the U.S., the U.K., Canada, Australia and the Netherlands. They have been meeting with each other on a yearly basis to discuss and work together on common tax evasion issues and challenges, but this year due to the pandemic they had to meet virtually. This year, the designated challenge they focused on involves the role of cryptocurrency and the financial technology industry in tax evasion.

Cryptocurrencies such as Bitcoin and Ethereum have become more of a priority in recent years for the IRS and other tax authorities abroad as they seek to uncover information on the quickly growing assets. Digital currencies have been used for money laundering, drug sales, human trafficking and other illicit activities, but they have also functioned as profitable investments for millions of people. The nature of the technology enables anonymous transactions, but the global tax enforcement chiefs warned Thursday that users would be mistaken to assume that cryptocurrency is untraceable by the authorities.

Last year’s challenge for the J5 also involved cryptocurrency, but this year’s challenge focuses specifically on crypto and fintech. “The value of these challenges really cannot be overstated,” said Jim Lee, chief of the IRS’s Criminal Investigation division, during an online press conference Thursday. “During a challenge, experts from each country with varying technical skill sets gather together with the mission of leveraging real data from a variety of open and investigative sources available from each country. Due to COVID-19, we’re unable to get everybody together in the same room, but I’m very excited about this virtual program. Using a variety of analytical tools, members from each country are put into teams with tasks for generating leads and finding tax offenders using cryptocurrency based on the data available to them during that challenge.”

He sees it as a way to break down barriers between the countries, work closely with their counterparts and share resources. The IRS-CI division will be lending one of its experts to the Australian tax authorities. 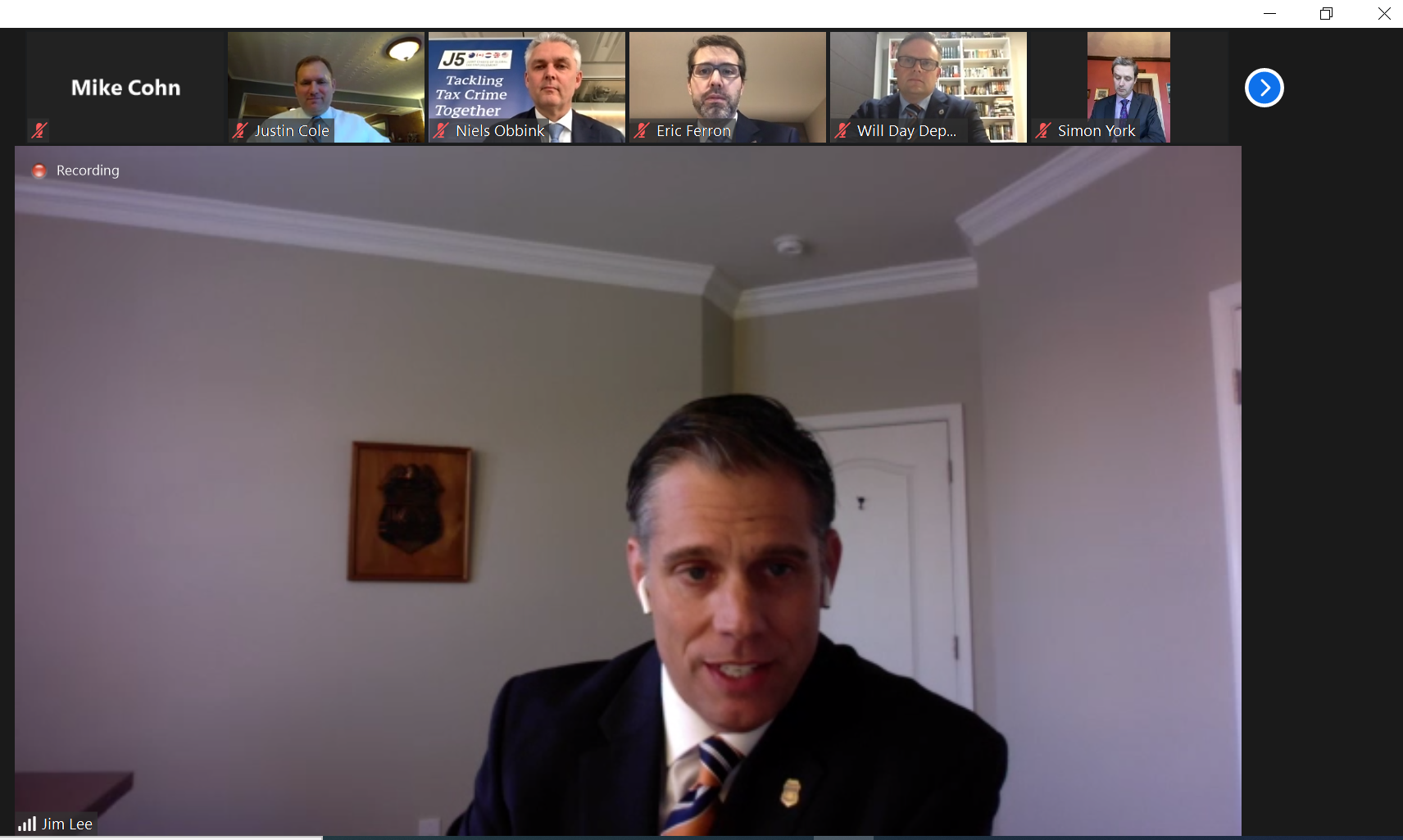 “I’m pleased to announce the commencement of a secondment of a senior officer from the IRS Criminal Investigation arm to the ATO in Australia,” said Will Day, deputy commissioner of the Australian Tax Office. “That has now commenced. It’s the first time that the ATO has had a secondment from an allied country. It’s a big milestone and it’s a great opportunity to continue to develop and undertake high-impact operations. Whilst the COVID-19 has been disruptive on all economies, our work in addressing some of the attempted fraud in stimulus measures assisting Australia’s economic recovery has rapidly advanced our insights and understanding into identity and cybercrime, so we’ve really upped the ante on our approach to cybercrime, and we’re using those insights to disrupt the ability of groups that target Australia and our J5 partners.”

Tax evasion schemes have become more complex and aggressive, according to Eric Ferron, director general of the Criminal Investigations Directorate at the Canada Revenue Agency. The coronavirus pandemic has only complicated matters for the tax enforcement heads.

“One of the biggest challenges over the past year has been adjusting to the COVID-19 pandemic, which has brought many changes to the way we work,” said Ferron. “The number of cases has risen in Canada and throughout the world. As the situation evolved, we had to adapt the measures we put in place to protect our staff. Although the J5 has continued to do searches and interviews, at certain times and in certain geographic areas, some of these were delayed. Other challenges of COVID-19 include restricted international travel, specifically with regard to simultaneous investigations in partner countries.”

Many employees had to work remotely and didn’t always have access to the computer systems they needed back in the office, he noted.

The work by the J5 led to a case being heard in a court in the Netherlands stemming from a cryptocurrency investigation, and the J5 also carried out last year an investigation in which an offshore financial institution played a role.

“We are very committed to further operational cooperation with our J5 partners in the fight against cross-national tax crime and money-laundering threats, including cryptocurrency, as well as to combat the enablers of global tax evasion, while working to share intelligence and data in near real time,” said Niels Obbink, managing director of the Netherlands Fiscal Information and Investigation Service. “To enable the sharing of intelligence and data, we are continuously developing and improving the tools to facilitate this exchange.”

The tax enforcement heads are seeing tax crimes becoming ever more sophisticated, but they believe their international cooperation is helping them keep pace.

“I’m incredibly proud of how far the J5 has come as an international tax crime fighting organization,” said Simon York, director and chief investigation officer of HM Revenue and Customs in the U.K. “When I called for action at the OECD forum on tax crime back in 2017, this is exactly what I wanted to see. Our collective commitment, our ambition to tackle transnational tax crime and money laundering, has always been our greatest strength, and over the past few days it’s been clear that this is stronger than ever. We’ve made great progress and we’re now delivering on those ambitions. Not only are we working on some of the most complex tax crime methodologies we’ve ever seen, but we’re working so closely together in sharing our respective knowledge, our capabilities, our intelligence, that we’re spotting much sooner how these MOs are evolving.”

“It’s been said tax administrations are always a step or two behind the tax cheats, but I’m confident that through the work of this great organization, that’s no longer the case,” York added. “2021 looks set to be a great year for the J5, so expect to hear much more from us.”

The relationship is stronger than ever between the international tax authorities, according to Lee of IRS-CI, and he expects to see more international actions in the coming year against offshore operators and virtual currency schemes, especially in the fintech industry.

“Many people out there feel that just because they’re dealing with cyber in the blockchain crypto area, they’re anonymous,” said Lee. “But I think with some of the results that you’ve seen out of the United States and the J5, it’s not anonymous. We’re out there. We’re watching everybody in this space internationally and domestically as well.”

Thu Feb 4 , 2021
KEY POINTS Shares of Hyundai and Kia surged as a potential deal with Apple to build electric vehicles emerges The $3.59 billion deal is expected to be finalized on Feb. 17 The first Apple Car will most likely be self-driving, or autonomous Shares of South Korean automakers Kia and parent […]